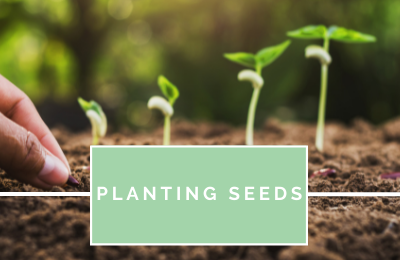 The landscaping around my house looks magnificent these days. This is the result of planting many seeds and a few small plants that have matured over the course of a decade. A business is no different.

A natural example of planting seeds in business is the Sales function. Most sales teams invest in building relationships within a target client’s organization, even if there is no apparent or immediate opportunity. I remember meeting Chethan Rao of Equis Corp. at a networking event more than a decade ago. He continued to cultivate our relationship while leading a local chapter of a charitable organization that I’m involved in called Pratham. My trust and comfort with him led us to call on his firm Newmark when we were looking for a new corporate Real Estate agent for TEOCO’s Fairfax offices.

While planting seeds to further sales may seem like an obvious thing to do, what is not as obvious is that the concept of planting seeds also applies to many other functions, including recruiting. For example, I met Derek Canfield in January 2005 when he was on a business trip to Northern Virginia for his start-up. While we discussed possible opportunities to partner, I must have planted a seed about working at TEOCO because he joined us later that year.

I met Avi Goldstein in 2006, soon after we had acquired Vibrant. In that conversation, I planted a small seed about the possibility of working together. About two years later, that resulted in him joining TEOCO in October 2008. I have hundreds of similar examples, but I mention these two as they have had an outsized impact on TEOCO.

TEOCO’s desire to plant seeds in the domain of innovation has led to the creation of our Innovation Hub; a small group of people looking at futuristic technologies relevant to our business. We started exploring blockchain technology before we had any idea how this would apply to our industry. We started looking at UAV: unmanned aeronautical vehicles, also known as drones, before it was fashionable. Now this group is looking at creating solutions for the undersea cable industry. Some of these seeds will not just sprout into tiny little plants. They might lead to a breakthrough innovation that becomes critical to our future growth and success.

Many years ago, I started cultivating a relationship with the National Center of Employee Ownership (NCEO). One day, NCEO’s Executive Director reached out to see if I would be willing to work with an ex-NCEO staffer named Semil Shah. The Wharton School of Business had retained Semil to do some work for a segment called IndiaKnowledge@Wharton. I remember doing a face-to-face interview with him in Boston in August 2009.The result was a powerful piece titled “Accidental Entrepreneur” that has created many opportunities for me, both in terms of speaking engagements and networking.

Just last week, I spoke to a business valuation consulting firm who is providing a fairness opinion report to a publicly traded company that is in the process of being acquired by a Private Equity firm. Part of the valuation firm’s work involves contacting potential acquirers, so I agreed to look at the deal. A small seed has been planted. While this seed may never produce a meaningful outcome, I will not be surprised if sometime in the next few years we get a potential lead for a future acquisition.

I plant a lot of seeds. Some of them take a long time to grow, and some never do, but that doesn’t deter me. I continue to plant seeds as a part of my normal routine because it has been one of the keys to our long-term success!