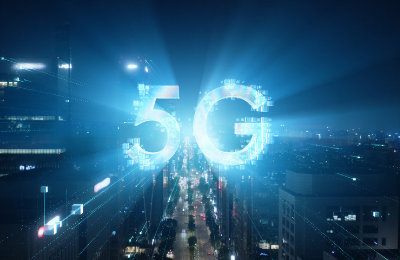 With the introduction of 5G technology for mobile telecommunications, new frequency ranges have been made available to telecom operators, a spectrum called C-Band – a set of radio airwaves operating at a frequency range between 3.7 and 3.98 GHz in the USA. In the past several months, the telecommunication authorities of nations worldwide have auctioned the new frequencies to telco operators for hefty prices. According to Engadget, a multilingual technology blog network, Verizon, AT&T and T-Mobile spent $78 billion on the C-band spectrum for 5G. All three large American carriers will use this spectrum to build out their 5G networks.

It is common knowledge, in the aviation community, that the filters currently used in radar altimeters are not very selective. This was never a problem with no signals around their spectrum, and flat and inexpensive filters were more than adequate for their intended function. However, with the introduction of 5G signals in the C-Band, this is no longer the case, and interference could cause a radar altimeter to show a false altitude or fail entirely.

In the United States, the aviation industry noted during the Federal Communications Commission (FCC) rulemaking process that led to the C-Band auction, that deployment of 5G networks in this frequency band had the potential to introduce harmful radio frequency (RF) interference to radar altimeters currently operating in the globally-allocated 4.2–4.4 GHz aeronautical band. It also noted that further study was needed to adequately characterize the performance of presently fielded radar altimeters operating in the presence of RF interference from future 5G networks. RTCA, a Standards Development Organization, created the Special Committee 239 (SC-239) 5G Task Force in April 2020 to lead this study effort as a multi-stakeholder group with open participation from the interested public. The results presented in the RTCA report revealed a significant risk of widespread interference with the potential for broad impacts to aviation operations in the United States. A report by the European Communication Committee (ECC PT 1) that is currently in progress will provide information on whether adverse effects can also be expected in Europe.

Aviation authorities have responded to the safety concern in different ways. In the United States, the FAA issued two Airworthiness Directives requiring revising the limitations section of the existing aircraft flight manual (AFM) to incorporate limitations prohibiting certain operations requiring radio altimeter data when in the presence of 5G C-Band interference as identified by Notices to Air Missions (NOTAMs). 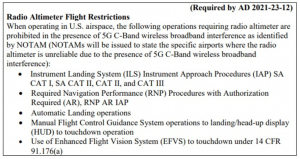 As these safety restrictions could affect flight schedules and operations, telecommunications carriers have offered to voluntarily delay 5G deployment and restrict their antenna operations in areas close to critical airports where interference could lead to the most problematic disruptions. Working with the aviation community and wireless companies, the FAA submitted 50 airports to have such buffers.

In Europe, the European Aviation Safety Agency (EASA) has decided not to adopt the FAA ADs, partially, because the 5G spectrum in Europe is slightly farther from the frequency range used by radar altimeters. However, it has published a SIB 2021-16 pointing the operators’ attention to the 5G Interference issue and recommending several safety measures to mitigate the potential for operational disruption.

Meanwhile, the aviation authorities are working with airlines and manufacturers to assess how radar altimeters perform in the 5G C-band environment. As tests prove that some altimeters are safe, it will be possible to remove some restrictions on aircraft operations with those altimeters. Disruption risk will gradually decrease as more altimeters are tested and deemed safe, retrofitted or replaced.

While the aviation world is scrambling to contain the operational disruptions and update its technology when deemed obsolete, what about telecommunication providers?

We asked Thomas Neubauer, Vice President of Innovation and Business Development at TEOCO to provide his perspective on this topic.

“This is a significant image issue tied to the already controversial 5G deployment. It certainly looks like the telecommunication world was not fully aware of the implications of the aviation warnings. Their position has been: we acquired the C-band spectrum following the rules, so the problem can’t be on our side, resulting in their hands being forced based on safety concerns. As the challenge for aviation regulators is to replace all the “guesswork” with fact-based insights, what can the telcos do other than delaying deployment? As demonstrated by the analysis in the RTCA report, the potential safety risk depends significantly on the actual scenario, 5G network buildout, base station configuration, power settings at the 5G transmitters, and landing pattern for the respective airports. We, at TEOCO are convinced that Mobile Network Operators (MNOs) can recover complete control of the matter and offer significant support to aviation by starting a systematic signal and interference analysis campaign around airports.

Our software solution, AirborneRF, is currently used globally to holistically describe the cellular connectivity in the airspace for UAV operations. It is therefore uniquely positioned to also provide actionable insights on signal interference and allow MNOs to demonstrate the impact to the radar altimeter of all contributing signals of the mobile network for every known departure and arrival procedure, based on live cellular network information. MNOs can use this technology to analyze existing deployments and consider new sites and their impact on airports. 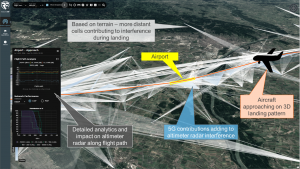 Such information is invaluable to aviation authorities when gathering fact-based evidence to support bans and restrictions removals and ultimately allow 5G deployment with limited disruption to the aviation system. Providing fact-based insights developed with AI algorithms, will help separate facts from fiction and make sure airspace safety is not compromised anywhere.

It seems awkward that with the aviation industry under heavy pressure due to the COVID-19 pandemic, an issue of such importance as the 5G interference has emerged to the widespread public attention only weeks from the planned full scale 5G network deployment. Additional disruption of service and passenger inconvenience seems inevitable. We trust that the telecommunication world will do the right thing and decide to pro-actively run systematic signal and interference analyses to support the aviation authorities in reducing the impact of 5G deployment to aviation operations to the absolute minimum” concludes Mr. Neubauer.