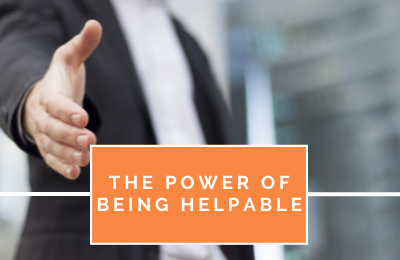 The Power of Being Helpable

I first met Robb in the year 2000 when the dot-com bubble was at its peak. My company had agreed to develop some software for his start-up that would help new home builders track and manage their leads, which were consumers interested in buying new homes. Robb had been in business for a while, but this was his first attempt at creating a technology-centered business model, so naturally he didn’t have much experience in this area.

I offered to guide and help him with his business challenges, but a meaningful conversation failed to materialize. One Saturday, I finally convinced him to invite me to his home for coffee and bagels. As we started discussing his sales funnel, it became clear that he was struggling to gain traction and wasn’t generating meaningful revenue. At one point, he grew a little frustrated and agitated and told me, “Nobody else in the company seems to care enough about our business challenges.”

Robb’s remark surprised me. In my opinion, if Robb’s team was not stepping up to the plate to help him, as the CEO, he was responsible for this failure. Either he had hired the wrong people, or he had failed to provide them with the right leadership. I knew his team was sincere and caring. It occurred to me that maybe Robb just wasn’t sharing his challenges and frustrations with them.

I had seen this behavior from Robb in my own dealings. I felt he had become a prisoner of his own making, so I asked him, “Do you consider yourself to be a giving person?”  When he said “yes”, I asked him why he chose to be that way. He said he did so because it gave him joy to help others. He still didn’t see where I was going. I followed by asking him, “Are you willing to give others the same joy by giving them an opportunity to help you?”

Many of us choose to be giving. I see it repeatedly in my dealings with people. However, the opposite is equally true – sometimes the most giving people are unwilling to ask for help from others; or reluctant to accept help, even when it is offered. I don’t know if this is a matter of pride, ego, or some form of potential rejection. Perhaps it is a simple case of not wanting to “owe” anyone anything.

What we fail to realize is that others are just like us. Just as we take joy in helping, most people in our circle would find the same joy in helping us. By accepting help from others, we are not just “taking”, but we are also giving them a chance to experience the same joy we do when we reach out to help. This counterintuitive failure causes people who only “give” to be, in my opinion, inconsiderate.

To continue my earlier story, a few weeks after the Saturday meeting at his home, Robb called me. He seemed happy and excited. “You won’t believe this, but I just got the most wonderful feedback from my team. They have so many ideas and their level of engagement is amazing. I feel certain that we can now overcome our challenges”.

I discovered this secret rather early-on in my life. I feel that I was born to serve – not just by being a giving person, but by also being someone who is helpable. Whenever the chips are down, I have had so many people step up to help me. While I rarely miss an opportunity to help, I can say with much pride that I don’t let an opportunity to ask for help go to waste either!