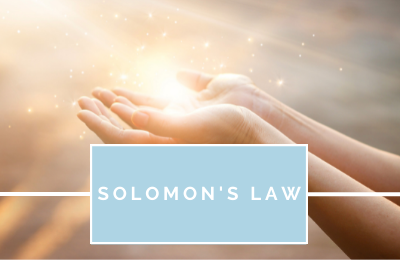 That brings me to the following hypothesis: In order to live a happy and successful life, we need to build mechanisms that can help us release the pressure we face in our daily lives. Where does the pressure come from? Most often, it is a result of wanting a favorable outcome. This could be in career, romance, sports, friendship, or any other domain. The more we want something, the more we feel pressured to succeed.

As I experimented with various ideas, I came up with a “law” that has worked well for me: In order to get what you want, you must be willing to walk away from it. I named this formulation of my thoughts Solomon’s Law. The idea of naming it after King Solomon came to me from an ancient fable of two women who show up in King Solomon’s Court, both claiming to be the mother of the same child.

While the fable emphasizes the intellect and the creativity of King Solomon, as delivered through his beautiful judgment, the moral of the story from my vantage point was how we increase our chances of getting to a favorable outcome by our willingness to accept an adverse one. Let me illustrate that with a few examples.

We were pursuing the acquisition of a company that built Radio Frequency Optimization software for 3G and 4G cellular networks. We met with them in May of 2011 and made an indicative offer, but they felt that our offer was too low. We stuck to our guns and moved on. Nine months later, we completed the acquisition at a price point that was very close to our original offer. During the late stages of the deal, it became clear to me that I would have lost internal support if our offer was much higher. I was not only negotiating with the sellers, I also needed to get our team on-board with the proposed transaction.

I remember a situation in late 1995, our first year in business, when our only client decided to consolidate vendors. We were told that if we didn’t agree to consolidate under a prime vendor, we would not be able to remain on the project. We viewed this prime vendor as a “body shop” and didn’t want to position ourselves as representing their values. With the support of our employees, I went back to our client and showed an unwillingness to become a sub-contractor. We risked being thrown out. But instead, the client decided to make an exception and allowed us to continue as a direct supplier. Over the next three years, our business with this client became even more sizable, something that would have been unlikely as a sub-contractor.

Both examples illustrate the power of walking away. It not only enabled us to continue to grow our revenues, but it also allowed us to create a powerful culture where we don’t sacrifice our values and our approach for incremental short-term gains.

When we are unwilling to walk away from what we want, we compromise, and then compromise some more, to get the desired outcome. As a result, while we may temporarily get what we want, it is often on terms that are unsustainable. Using relationships as an analogy, such a marriage is more likely to end-up in a divorce than in a lifetime of companionship. Willingness to walk away acts as a release valve, giving us a better chance to achieve our goals and dreams.

As an example, if I hire a job candidate without first getting buy-in from critical team members, I may get what I want during the selection process, but the new hire may struggle to achieve the desired level of success. I prefer to handle this situation by sacrificing my authority to hire who I want, in favor of securing the team’s buy-in. By taking such an approach, I make it much more likely that the selected candidate has the broad support base that they need to succeed when the going gets tough. This subtle practice of Solomon’s Law has become such an integral part of my daily life!