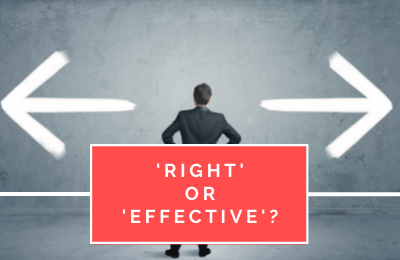 There are some people that always want to be ‘right’, and there are some that focus on being ‘effective’. This dichotomy is visible in most situations and circumstances.

It is my view that a person is better off choosing to be ‘effective’. Running an enterprise is not the same as proving a mathematical theorem. Entrepreneurs must have a fine sense of the art of the possible; their responses must be more accommodating and nuanced. They must perform in the space of humans, not in the mathematical realm of Banach or Hilbert spaces.

Many years ago, we interviewed someone for an account manager position. After talking to her, I was certain that she was not a good fit; I thought her analytical skills left a lot to be desired and I didn’t see how she could understand and represent our solutions to the client. I shared my point of view with my colleagues, but they thought otherwise. They thought she had a positive personality and good communication skills – and asked me to hire her.

We have had such disagreements before. But what was striking about this situation was how they were so unified in their assessment. I seemed to be the odd man out and nothing I said persuaded them to change their mind. So, I decided not to force the issue. I have long recognized that good internal relations matter much more than any one business decision.

Within two months of joining, the new account manager resigned. She didn’t feel adequately supported, and her team leader was not happy with her performance. While my judgment was vindicated, I was saddened by the outcome. The only solace was that I had put my focus in the right place; on being effective, not right.

This dichotomy also pops up while making critical technology decisions. Back in 2002, it became clear that the telecom marketplace preferred web-based cost management solutions. Our competitor chose to make a quick and wholesale transition to a web interface while TEOCO decided to go slow to avoid business disruptions. They were right to transition to the web … but also dead wrong in the manner and the speed with which they did so. Our strategy to go slow eventually proved to be more effective.

TEOCO’s President Philip Giuntini summarized the ‘right’ vs. ‘effective’ dilemma for me with an interesting twist. He told me, “If there is a parade happening, and you can’t stop it, get in front of it and cheer!” He taught me not to fret about it; instead, see how to best leverage an unfavorable situation.

This lesson also resonates closer to home for me. Many years ago, when she was just eight years old, my daughter Nehal threw a tantrum and refused to accompany us to a family function. I told her there was no way she could stay alone because the law does not allow children under 12 to stay at home unsupervised. Realizing that she had no choice but to join us, she tried to make the best of the situation by asking for a scoop of ice cream on the way.

So, when it comes to deciding whether it is better to be right or be effective – choose to be effective and join the winning team. That is indeed the right answer!